There are a lot of words you could use to describe Thomas Spiotta -- hysterically funny, joyful, loving, an entertainer, and a Special Olympian are just a few offered by his mother, Jane. But these days, Thomas and his family can add another title to the list: Survivor.

Thomas, a 19-year-old high school student from Patchogue, has spent more than six weeks recovering at Stony Brook Children’s Hospital after an abdominal illness nearly took his life. Thanks to a team effort from surgeons, specialists and nurses at Stony Brook Children’s led by pediatric surgeon in chief Christopher Muratore, Thomas went home on Aug. 27. He is expected to make a full recovery.

Over the 4th of July weekend, Thomas, who has Down Syndrome, began to complain of stomach pain. His dad, Eugene, kept an eye on him, assuming it was just a simple stomach bug. 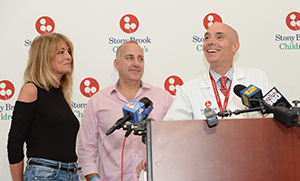 “When the pain didn’t go away, we figured that maybe it was a virus or he needed a bag of IV fluids,” said Eugene Spiotta, who is the assistant chief of the North Patchogue Fire Department. The Spiottas made a trip to their local emergency department, but Thomas was ultimately sent home after a series of tests were inconclusive.

At home, the pain worsened and Thomas’ condition progressively deteriorated over the next two weeks. Local medical professionals decided Stony Brook Children’s would be better able to address his needs.

“When we got to Stony Brook, it was like going from 0 to 100,” Eugene recalled. Ultimately, Dr. Muratore diagnosed Thomas with portal vein thrombosis, a blood clot in the major vein that carries blood from the intestines to the liver. Dr. Muratore explained that, just like a clog in household plumbing, a clot in the portal vein led to clotting in other smaller veins. Eventually, the intestines themselves were deprived of blood and began to die.

“When identified early, a clot can be treated with medication and other means that don’t involve surgery. But by the time Thomas got to us, his illness had already progressed so much that he was in danger of dying,” Dr. Muratore said. “We all have plenty of intestine in our body, but it’s still a limited supply. We had no choice but to operate to determine if the intestine was healthy or not. We determined that a fair amount of the intestine had died.”

Thomas underwent three surgeries at Stony Brook Children’s to remove three feet of his intestines and begin the healing process. Most of Thomas’ time in the hospital was spent in the Pediatric Intensive Care Unit.

“Tommy shows the strength of the human spirit,” Dr. Muratore said. “Against all odds, he had a great recovery. We may never know what exactly set off the illness -- we plan to complete the comprehensive workup of his clotting system in six months when he can hopefully come off the blood thinner medication.”

The Spiottas expressed their gratitude to Stony Brook Children’s after Thomas’ discharge, calling his recovery a miracle.

“Seven weeks ago, I came into this hospital believing that my son was my best friend, like my shadow, I’m leaving here realizing that I’m actually his shadow. There are so many people my son’s life has touched that I didn’t even know. I thank God that today I get to walk out of here with my boy,” Eugene said. “I can’t thank the team at Stony Brook enough for what they’ve done for my son and for my family. Every doctor and staff member played a huge role, and seeing what the doctors, nurses and volunteers here do on a daily basis is unbelievable.”

The Spiottas also thanked the police, fire and rescue departments locally and from around the world that sent the family their support. 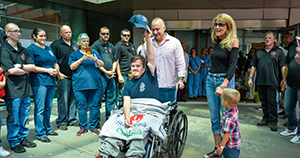 As the Spiottas left the hospital, they were greeted by thunderous applause and cheers from dozens of Long Island firefighters, police officers and friends. Full of emotion, Thomas briefly covered his face with his hands before breaking into a wide grin and pumping his fists in celebration. Thomas was thrilled to give hugs and high fives to as many people as he could before climbing into his getaway vehicle -- a North Patchogue fire truck. 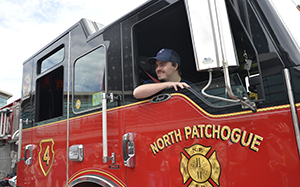 “I missed home and seeing everyone,” said Thomas, who is looking forward to going back to school and getting a Slurpee. “But I’m glad to see everyone who came out here. Thanks to everyone at Stony Brook. They were really nice people.”