Anna and Greg Quigley were looking forward to growing their family and giving their four-year-old son, Jaxon, a sibling. But when Anna, a special education teacher, went in for a routine 10-week sonogram, the exam revealed she was pregnant with triplets.

Triplet pregnancies are rare, and these days, when a pregnancy involves triplets, it’s often not a complete surprise. There may be a family history of multiples, the mother may have delayed childbearing until her 30s, or the parents may be undergoing fertility treatments – all factors that can increase the likelihood of multiples. 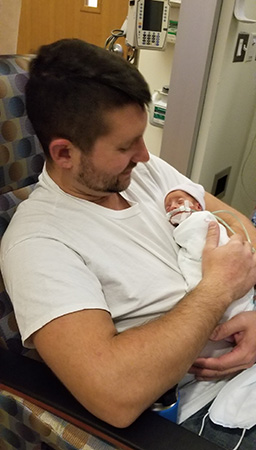 Greg Quigley gets some bonding time in the NICU with his littlest triplet, Cole, who weighed just two pounds, 10 ounces at birth.

Even though Anna had a brother and sister who were fraternal twins, since Anna had already had a single-baby pregnancy she thought she’d be just be adding one more to her family. But one turned into three. Luckily, with our Coordinated Fetal Care Program, Division of Maternal Fetal Medicine and state-of-the-art NICU, Anna was already in the right place for the care she and her babies would need.

The Challenges of a Multiples Pregnancy
Whether they occur naturally, as in the Quigley’s case, or as a result of fertility treatments, triplet pregnancies require special medical attention because they’re immediately considered high risk. Fortunately, Anna, a resident of Suffolk County in New York’s Long Island, was already seeing a Stony Brook University Hospital physician. This meant she was connected to the county’s only academic medical center, which is also home to a large Division of Maternal Fetal Medicine, a state-of-the-art, all-private room Neonatal Intensive Care Unit (NICU) and the county’s only children’s hospital. In addition, Stony Brook is also a Level 4 Regional Perinatal Center, the only hospital in Suffolk County equipped to offer the highest level of care to babies.

The Importance of Early Care for High-Risk Pregnancies
Although the main campus of Stony Brook University Hospital is located in Stony Brook, there are four outpatient locations where Stony Brook specialists see patients. Because Anna was carrying multiples, she was immediately referred to the hospital’s Division of Maternal Fetal Medicine, where she was seen throughout the balance of her pregnancy in the Hampton Bays office by Diana Garretto, MD, Clinical Assistant Professor, Department of Obstetrics, Gynecology & Reproductive Medicine, and Kimberly Herrera, MD, Clinical Assistant Professor, Department of Obstetrics, Gynecology & Reproductive Medicine. Unlike women with single-baby pregnancies, a woman carrying multiples requires many more frequent doctor visits. As a working mother with a young son, having access to this high caliber of care close to home was a welcome and important convenience for Anna and her family.

With triplets pregnancies, the babies are identified by letters A, B and C. The Quigley’s Baby A was a girl with her own placenta, while babies B and C were identical twin boys who were sharing one. When a placenta is shared, it can result in uneven blood flow and complications in the pregnancy. This requires careful monitoring to ensure the health of all three fetuses.

The Power of Coordination
To help patients who are experiencing high risk pregnancies to manage their care with the many specialists they often need to see, Stony Brook also started a Coordinated Fetal Care Program in 2018. According to Marybeth Heyden, DNP, RN, PNP, the program’s coordinator, the burgeoning program provides patients with answers to their questions, offers support, obtains referrals, links to resources and secures appointments at times and locations that are most convenient for them.

Since Anna knew in advance that her babies would be in the NICU, she was scheduled to meet with the unit’s doctors and staff prior to giving birth, in order to take a tour and become familiar with its procedures and processes. Explained Shanthy Sridhar, MD, FAAP, Professor of Clinical Pediatrics, Division of Neonatology, Department of Pediatrics, and Medical Director of Neonatal Intensive Care Unit, “Mrs. Quigley was supposed to come in at around 30 weeks’ gestation to meet the NICU team and tour the unit. Triplets are usually scheduled to be delivered around 34 to 35 weeks’ gestation. But Mrs. Quigley went into spontaneous labor at 28 weeks, became an in-patient for monitoring and delivered at 30 weeks, five days. We didn’t meet her until she was already in Labor and Delivery.”

Stony Brook’s High-Risk Clinic Offers Follow-Up Care for Babies
After babies are discharged from the NICU, they are referred to the hospital’s unique NICU High-Risk Clinic where experts will follow their progress regularly for up to three years to ensure they’re meeting critical milestones. The team specializes in recognizing the special needs and nuances of babies who required NICU care and are able to quickly provide resources and referrals when necessary.

A Very Happy Ending
While it’s impossible to know exactly when babies will come, parents can decide in advance where they will be born. Choosing a hospital equipped to provide a full spectrum of services for newborns lowers the chances of a premature or sick baby requiring transport to another, better-equipped facility. Because Anna had already planned to deliver at Stony Brook University Hospital, she had the reassurance of knowing that both she and her babies would have access to the highest level of neonatal care in Suffolk County.

On December 30, 2020, more than two months before the original due date, Anna and Greg welcomed three tiny new members to their family. The first to be born and the largest at three pounds, nine ounces, was Christina followed by Kyle, who weighed three pounds, three ounces at birth, and Cole, who was two pounds, 10 ounces. Christina came home on February 4, 2021. Her brothers followed her one by one, with Cole finally arriving home in early March. With the support of lactation specialists at Stony Brook, Anna has even mastered breastfeeding triplets, and all are growing and thriving.

Stony Brook Children's Services is offering Telehealth services which will allow our patients to receive our high-quality care from the safety and privacy of their home.

To see if your pediatric needs can be met virtually, please call Stony Brook Children's Service at (631) 444-KIDS.

If you have already booked a Telehealth visit and have questions about connecting to Microsoft Teams for your visit, please call one of our representatives at (631) 638-0597 Monday through Friday from 8 am to 6 pm. They will be happy to assist you. If you require support outside of these hours, please visit stonybrookmedicine.edu/telehealth.