Three Hearts Beating for One

They were supposed to move into their new apartment, and then the scheduled induction would happen the next day. They would have everything in order, and just like their check-ups showed, the baby would be healthy, and their new home would be ready to welcome their first child. 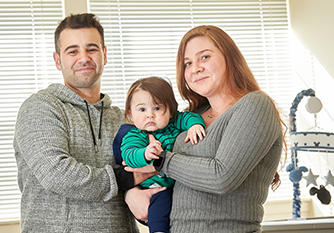 That is what Esra Kucuk and her fiancé Anthony Zerillo planned for, but life is what happens when you’re busy making other plans. Instead, their journey would take an unforeseen twist that tested their strength and faith through a rocky and traumatic start.

“I started having contractions the night before I was scheduled for an induction. I went to a community hospital and ended up having a c-section. It was discovered that Westley (the baby), had meconium aspiration syndrome and he would have to be transferred to Stony Brook Children’s Hospital while I was healing from my surgery,” Esra said. “It was a few hours later that I received a phone call from Laurie Panesar, MD, Division Chief, Pediatric Cardiology at Stony Brook Children’s, saying my baby had three holes in his heart. He had a rare condition called Tetralogy of Fallot. I was terrified. I still hadn’t even held my son, and now his heart had holes and he was miles away.”

While Esra was recovering from a c-section, Westley was rushed to Stony Brook Children’s, the only hospital in the area that could properly care for his condition.

“I was torn between three places,” said Anthony. “It was chaotic. We had to be moved out of our apartment that day, and now my fiancé and my son were in two different hospitals. It was so difficult trying to be strong for everyone. The staff and specialists at Stony Brook were very good at explaining everything that would need to happen. They made us feel comfortable with his condition and our decisions.”

Esra begged to be released from the hospital earlier so she could be with her son and fiancé at Stony Brook. Her request was granted, and when she got to Stony Brook, Dr. Panesar and the team of specialists counseled the family on their options.

“Dr. Pansear gave us her personal phone number. She was so kind and thorough. She made Anthony and I feel confident about the decisions we were making for Westley’s care. I was afraid when I heard my baby had holes in his heart, all I could think was, is that something that can be fixed?”

On the advice and recommendation of the team at Stony Brook, Westley would undergo surgery at Columbia Hospital. After surgery he was under the care of his Cardiology team at Stony Brook and in the Neonatal Intensive Care Unit for 33 days. 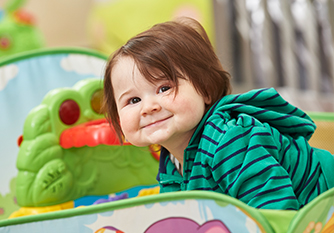 “No parent wants to see their child go through this,” Anthony said. “The emotional ups and downs and the unknowns were difficult. When we finally were able to bring Westley home, it was the best feeling, even though we knew our son had a permanent heart condition that would need monitoring. We knew our team at Stony Brook would help us through.”

Now, at 10 months old, Westley is scheduled for regular checks ups with Dr. Panesar and he is a healthy, happy boy.

“As crazy as it was, I am so thankful that we were in the right place for my son’s care,” Esra said. “To be able to have a hospital right here that could give our son the level of treatment he needed the day he was born and the days that have followed has given us peace of mind and place and people we’re forever grateful for.”