Sitting cross-legged on the floor of a vibrantly lit playroom, a little boy gleefully fiddled with a box of Mr. Potato Head toys. Flanking him on both sides, delighted at his antics, Haley Heckethorn and Tiare Keeno of Bodytraffic, a contemporary dance company, joined the boy in making his creations.

On the morning of their performance at Staller Center for the Arts on February 8, Hecketthorn and Keeno, along with the rest of their company headed over to the new Stony Brook Children’s Hospital to spend time with a few patients. Within the newly painted and decorated walls lined with oceanic themed paintings and papier-mâché art, they met with and performed for about a dozen of the forty patients.

“It’s always very rewarding to be able to give back to the community and spread the joy of dance with everyone, but especially with those who are really in need of a pick-me-up,” said JamalWhite, a dancer and Bodytraffic’s social media manager. The last little girl he visited became his favorite because of her delighted laughter. While two of his colleagues went through some of their steps, she sat giggling and clapping along. Said White, “It was the cherry on top.” 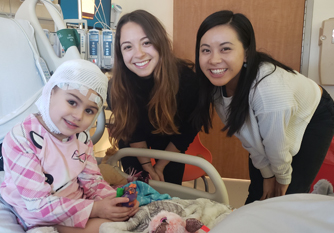 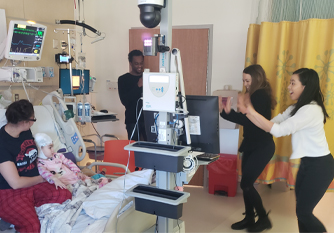 While the younger children seemed more interested in playing with the dancers and showing them their toys, some of the older children focused on asking them questions about their work and the company. This is familiar territory for many of the performers. During their tours, Bodytraffic often goes on outreach missions. Usually, they visit schools and teach students a few of their modern moves, or work with elderly residents at retirement homes. However, for some of the dancers, going into a children’s hospital proved to be something new and different.

“It’s one of my favorite experiences so far,” said Heckethorn, who has been with the company for two and a half seasons. “It was really lovely and especially doing that on a show day, it really inspires and brings a lot

of energy. We travel so often and it is really taxing, so going to a children’s hospital reminds us of why we dance and why we love it so much.”

Splitting off into smaller groups, the dancers were able to visit a few patients in their rooms where they showed off a brief version of a dance they would later perform in front of hundreds at the sold-out show at the Staller Center for the Arts. A few children even joined them in learning some steps.

Rachel Secrest, a dancer new to Bodytraffic’s season, said, “We visited this five-year-old, named Chris who recently had surgery. He was connected to a machine that was helping him. At first, when we came in, he just laughed at us as we danced. We showed him some moves, and he was giggling and nervous, but his mom was with him and got him up and out of the bed. He wanted to dance.”

“It’s tough seeing these kids who are quite sick and hooked up to different machines,” Secrest continued. “But as much as I could I tried to really look at their faces and do what I could to make them forget their troubles for a minute. I was seeing a kid I wanted to connect with and share a dance with.”

Bodytraffic started their day spreading smiles at the Stony Brook Children’s Hospital and finished with a sold-out show and a standing ovation at the Staller Center for the Arts. 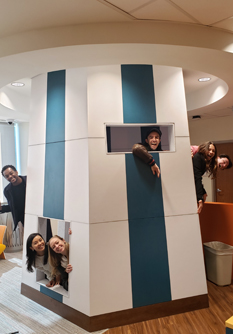 General operating support was made possible by the New England Foundation for the Arts’ National Dance Project with funding from the Doris Duke Charitable Foundation. The Outreach program was coordinated by the Staller Center for the Arts, Stony Brook Children’s Hospital and Bodytraffic. Paul Newland, Outreach Director at the Staller Center for the Arts said, “it was a wonderful collaboration, and we look forward to working with the Children’s Hospital again soon.”

By McKenzi Murphy, student of Stony Brook University School of Journalism
Photos courtesy of Staller Center for the Arts