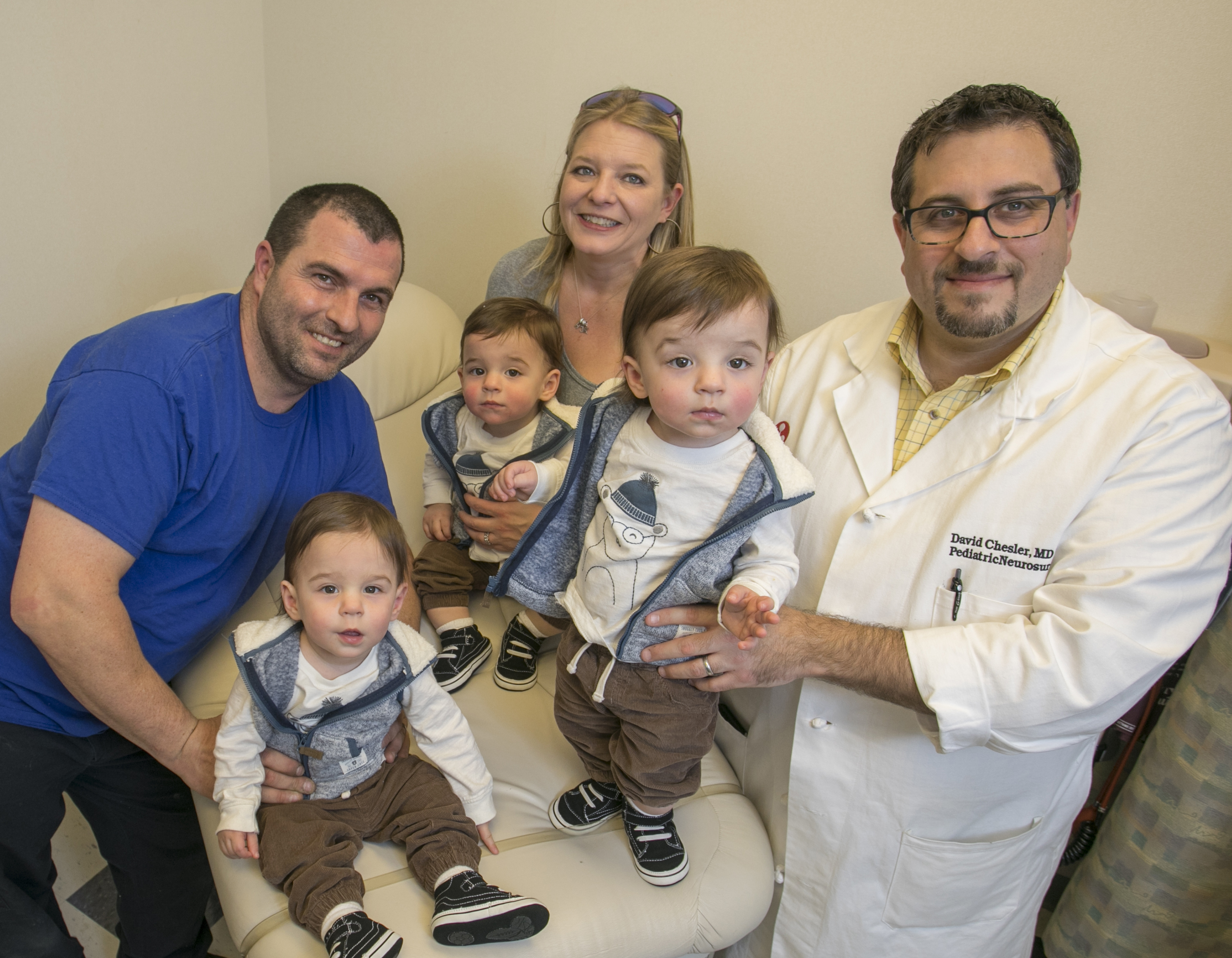 Last January, the Howard triplets, Jackson, Hunter and Kaden, just shy of three months old, made medical history when surgeons at Stony Brook Children’s Hospital performed the first known craniosynostosis surgery on triplets. Today the triplets continue to thrive and meet all their developmental milestones, according to their parents, Michael and Amy Howard of Center Moriches.

Craniosynostosis is a skull condition that is caused by a congenital premature fusion of one or more sutures (joints) on a baby’s skull.  All five Howards (mom, dad and the triplets) were recently at Stony Brook for a follow up visit with pediatric neurosurgeon, David A. Chesler, MD, PhD, an expert on craniosynostosis.

Dr. Chesler performed the endoscopic craniosynostosis surgery on Jackson, Hunter and Kaden on January 5-6, 2017, with assistance of Elliot Duboys, MD, a pediatric plastic surgeon. Jackson and Hunter, who are identical, had a form of craniosynostosis known as saggital synostosis (a long and narrow-shaped skull). Kaden, the fraternal triplet, had what is called metopic synostosis (more triangular in shape).

While craniosynostosis itself is not all that uncommon — there is approximately one case in every 2,500 live births — the odds of triplets having the condition is extremely rare. In fact, the probability of seeing this occur in triplets again is one in 160 trillion.

A few months ago, the specially designed helmets that the triplets wore 23 hours a day, seven days a week for several months post-operatively, finally came off. The helmets are key to the success of endoscopic craniosynostosis surgery, because they help mold the skull into a “normal” shape and aid in keeping the areas of removed skull from closing too quickly.

“You couldn’t tell they had surgery unless you looked for the scars,” said Dr. Chesler of the triplets who each now have a full head of hair on their recontoured heads. He will be following the triplets regularly for the next four to five years.

“I couldn’t be happier with their progress,” he said. “They’re right where they’re supposed to be.”

Aside from making medical history, life in the Howard household is, from Amy Howard’s account, what you would expect with three active toddlers who are learning to walk and talk. She said she especially loves listening to and observing Jackson, Hunter and Kaden during their many animated triplet baby talk conversations and seeing their distinctive personalities emerge.

At the rate the triplets are going, it won’t be long before they’re able to read all the media coverage about their successful, historic surgeries with Drs. Chesler and Duboys at Stony Brook Children’s Hospital and be able to spell craniosynostosis, too!