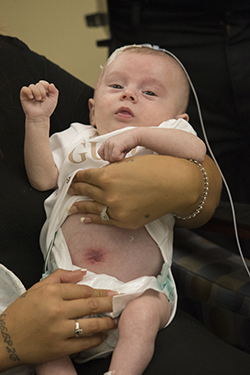 When little Christian Rojas’ parents found out they were having a boy, they couldn’t wait to welcome him to their growing family. But joy turned to fear, when an ultrasound revealed that the baby was developing with his intestines outside his body, a birth defect known as gastroschisis.

Stony Brook Children’s Hospital stepped in with a series of pediatric surgeries that saved Christian’s intestines and his life. Today he’s an adorable, curious three-month-old who coos and smiles and gazes at his parents. Christian is not quite ready to leave the Neonatal Intensive Care Unit. He can go home, his doctors say, when he is able to eat well and gain weight without IV nutrition.

“I was a worrywart the entire pregnancy,” said Christian’s mother, Nykki Hunter. “But Stony Brook monitored us very closely.”

Dad Chris Rojas praised the physicians and nurses who have cared for Christian since his birth at Stony Brook Children’s on May 5.

“With three little kids at home, we can’t be at the NICU every second. It’s tough,” he said. “Stony Brook saved Christian and we’re grateful.”

Christopher Muratore, MD, Chief, Division of Pediatric Surgery at Stony Brook Children’s, said Christian’s case is complicated. All babies born with gastroschisis have intestines that are malrotated, meaning the intestine did not develop the normal internal attachments since they developed outside the abdominal cavity and never returned to their normal position. When Christian was born, his intestines were not only malrotated, they were twisted, called, volvulus, causing ischemia, a dark purplish color – a sign that meant blood supply was cut off.

Muratore and his colleagues had to act fast.

“We were able to untwist the corkscrew that his intestines were in,” he said. “Then we took care of him by further opening the naval area, placed the intestine in a clear silo to protect them and follow the recovery. Medicines and intravenous fluids were used to allow the bowel to decompress and restore its blood flow.”

With several surgeries, Dr. Muratore and his colleagues inserted Christian’s intestines back into his abdominal cavity where they belong. “We were even able to give him a belly button,” Muratore said.

Stony Brook Children’s is the only hospital on Long Island that offers the pediatric surgery Christian needed.

“Christian’s specific condition is one of the most challenging newborn disease processes on the face of the Earth,” Dr. Muratore said. “If he had been born someplace else and needed to be transported to Stony Brook, Christian would have lost significant intestine due to the delay in getting here from another hospital, leading to intestinal failure from short bowel syndrome – too little intestine for nutrition, growth and development.” 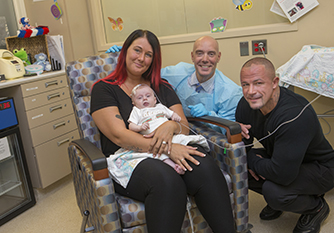